You are here: Home / News / Warehouse News / Collaborative robotics at the Automate and ProMat trade shows 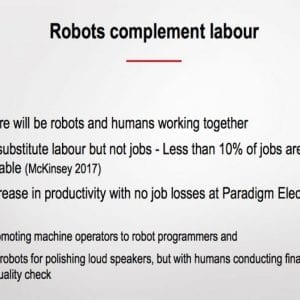 Six to ten years ago, exhibitors at Automate were promoting bin-picking in many, many booths. Bin picking wasn’t mentioned this year because it is an available option these days. For the last six years vendors have been promoting human-robot collaboration in manufacturing. Here’s what I saw this year at the big Automate and ProMat trade shows held last month in Chicago. Chicago’s huge McCormick Place Conference Center was once again home to the Automate and ProMat trade shows. Automate for robotics; ProMat for material handling solutions. Over 900 exhibitors covered 350,000 sq ft at ProMat while 400+ companies exhibited at the Automate show. Vendors appeared to be in the process of defining a broader definition of collaboration which includes all non-industrial robotics (mobile or stationary; manufacturing or service; professional or personal) in any way involving human-robot interaction. The interaction could be as little as different colored lights or as much as direct handling of materials back and forth to robots side-by-side on an assembly line. Universal Robots (UR), the collaborative robot pioneer, has sold over 12,000 of their co-bots worldwide in their short career (they sold 52 in 2009). 2016 sales were 60% greater than 2015 and their goal for 2017 is 80% to 100% over 2016. UR’s booth, the biggest at Automate, was consistently crowded and noisy. Lots of attentive interest. Recently UR added an app store for co-bot accessories, grippers and cameras. They presently offer 20 products but expect to have an additional 80 in the store by the end of 2017. Another sign of UR’s success was the use of their robots in other vendor’s booths – 25 different exhibitors demonstrated their products with UR robots. Intelligrated used a UR to demonstrate their goods-to-picker application; Creaform used one equipped with their HandySCAN to demonstrate 3D scanning […]