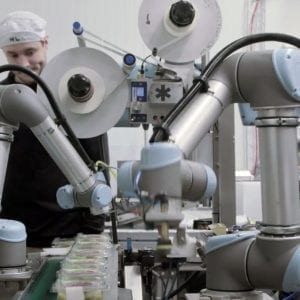 Pioneer of collaborative robots showcases new cobot-assisted, mobile, and modular tabletop system featuring vision-guided multiple part feeding and kitting with conveyor tracking and case loading-unloading. While most robotic cells and automated machinery in the market are stationary setups designed to complete one task for their usable life, Universal Robots Certified System Integrator, Allied Technology , has taken a new approach. Allied Technology’s new mobile tabletop system will be showcased in Universal Robots Pack Expo booth S-8257 , September 25-27 in Las Vegas, NV, and includes: Intelligent Part Feeder using Vision Guidance to singulate multiple different small parts Articulating End of Arm Tooling to pick multiple parts Conveyor Tracking and automation for crowding groups of parts on a conveyor Variety pack case loading and unloading of cases to be resorted All self-contained on a mobile tabletop system Also showcased in Universal Robots’ booth is a new demo featuring a UR10 collaborative robot that invites attendees to interact by interrupting its palletizing routine by pressing a button, prompting the cobot to present a bottle of water to the attendees. This demo shows several different types of applications/uses for the robot: Palletizing and depalletizing with flexible use: This type of application uses the UR to remove items from a tray, cart, box, or any other container that can be placed by the robot. After removing the items from a tray, the operator can use the robot for any number of operations, examples would be inspection, machine loading, presenting to an operator, or even manipulating the parts around other equipment. Interpreting input from outside resources: The UR10 robot is constantly monitoring for a signal from the button and once received, the programming uses a logic check to then maneuver the robot into performing a different action which, in this case, is presenting the […]