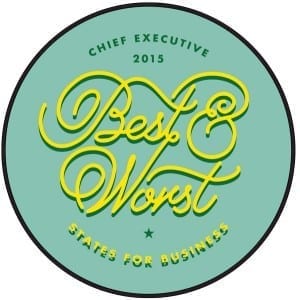 In our 11th annual survey of CEOs, Texas and Florida still dominate as the top two states for business, while California and New York continue to hold onto their traditional death grip as the worst and second worst states respectively. CHIEF EXECUTIVE CANVASED 511 CEOs across the U.S. asking them to evaluate four or more states with which they are directly familiar. They were asked to rate each with respect to three categories they regard as highly important: taxes and regulations; quality of the workforce; and living environment, including such considerations as quality of education, cost of living, affordable housing, social amenities and crime rates. After Texas and Florida, North Carolina edged out Tennessee for the third and fourth ranking, with Georgia, Indiana, Louisiana, Nevada, Arizona and South Carolina filling out the fifth through 10th places respectively. Following California and New York, business leaders see Illinois, New Jersey, Massachusetts and Connecticut as the worst places, largely due to the perception that they are high-tax and over-regulated environments. “Texas continues its economic miracle despite the hit it has taken with the slowdown in oil fracking.” But there are degrees of disenchantment. One of the biggest factors in CEOs’ thinking is the attitude that local and state authorities have toward business and the perceived capriciousness of regulations, particularly those imposed on smaller firms least able to bear the costs. In this respect, if it were possible to rank 60th out of 50 states, California would likely rank No. 61. Joseph Vranich, an expert on corporate relocations, has counted more than 200 major companies with tens of thousands of employees that left the Golden State over the last four years. While Google, Apple, Intel and HP are not likely to leave, neither do they expand locally if they can help it. Google […]