A very determined Hytrol distributor recently completed a project that involved cases going through a packing operation consisting of six lines feeding tapers. After exiting the tapers, five of the lines fed at a right angle into a takeaway line. That takeaway ultimately fed a perpendicular line carrying cartons to a manual palletizing area.  The last taper fed into a 45 degree offset and then straight into the manual palletizing area.

Utilizing the design ibility of E24EZ technology, they were able to provide the customer with zero-pressure accumulation throughout the entire system. In addition, PLC controlled merge points were replaced with inline control by assigning priority to the feed lines and utilizing enhanced EZLogic module outputs to signal accumulation on the primary takeaway. The entire system required only two main power drops for motor power and two drops for Ez-Logic IOP control power.  With the new design, the distributor was able to show the customer a savings in mechanical as well as electrical hardware and labor.

The distributor’s ingenuity combined with the ibility of E24 and EZLogic technologies resulted in the project being awarded and completed successfully. Installation of the entire system took less than two days and required no electrician.  The customer, who is completely satisfied with the new system wound up with a low maintenance, low noise, zero pressure conveyor system as opposed to an alternative proposal for minimum pressure conveyor at a higher price, longer install and more electrical drops required!!!.

For more information, download a PDF of the entire Case Study. 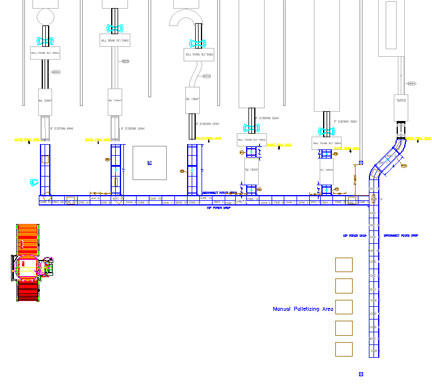