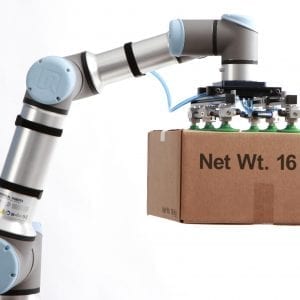 At the China International Industry Fair ( CIIF ) tradeshow in Shanghai this morning, Universal Robots is displaying a brand new collaborative robot capable of lifting a 35 pound payload. That may not sound like much, but it signals a major trend in the automation industry and an important milestone in the way humans and robots work together: Operating alongside people and outside cages, collaborative robots (often just called cobots ) are now performing manufacturing tasks that were previously the domain of caged off industrial machines. Collaborative automation has, in just the last decade, changed how a variety of light industry sectors operate, including components manufacturing, various kinds of scientific benchwork, and light manufacturing of products as disparate as eyeglasses and soft goods. The robots, designed with an abundance of sensors to enable them to operate safely alongside humans, have typically consisted of multiple degree of freedom robot arms that sit on a bench top and perform light, repeatable tasks. It’s no wonder. Since the 1950s, industrial automation existed exclusively in restricted environments, and robots operated in fenced off zones away from people. The idea of being within striking distance of a working robot was unthinkable. Market adoption of cobots, which use force sensors and machine vision, among other sensing technologies, to avoid striking humans or shut off in the event of a strike, demanded those robots start small. So far, the safety record for cobots has been impeccable. That’s helped prime the market for larger robots capable of greater payloads. And that, in turn, has helped the collaborative automation sector expand into new markets and adopt heavier manufacturing and logistics roles. Enter Universal Robots, which is the industry leader in cobots by unit sales. The company’s new UR16e combines a 35 pound payload with a reach of about […]