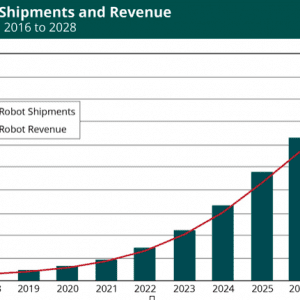 For the past thirty years, the robotics industry has been defined by a large number of providers building similar products with proprietary operating systems, controllers, and software to perform largely similar tasks. This applies particularly to mobile robotics. This might be called the Artisanal Age of robotics given the significant challenges faced in developing robots for different use cases. But as technology has matured and deployments have become more common, hardware costs have gone down, and the corresponding drop in sensor prices has made it less difficult to build sophisticated mobile robots at scale. The value is now shifting to the middleware and software that can power these robots and develop their value-added services. Ultimately, these companies will extend their offerings beyond different hardware and will have a two-fold effect on the robotics industry: 1. Companies will harmonize and establish interoperability and standards that will greatly expand the capacity of end users to adopt robots. 2. Companies will shift value from the ability to build robots to the ability to deploy solutions at scale, with value concentrated in management, analytics, operations, and monitoring. Their success or failure will depend more on integrating multiple robots and use cases (drones, unmanned ground systems, underwater vehicles etc.) with more general Internet of Things (IoT) offerings like smart wearables, connected infrastructure, and the smart workforce. These companies are not developing vertical innovation that greatly expands the capabilities of one robot. Advancements in mobile manipulation, improved mechatronics, flexibility, and so on will still be spearheaded by individual manufacturers, universities, and government departments. The value for these companies is the economies of scale they will reap as they spread. In turn, the wider distribution of cloud computing and value-added services will be a broad-based force multiplier for robotics. In such an ecosystem, there are four […]