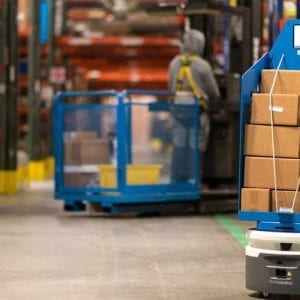 Spike in labor cost and shrinking qualified workers resulted in alternative robotic solutions Robotics has resulted in a shift to the working system in recent years. Robots started filling the gap where labor was high and the work carried complications. One such place is the distribution network where Autonomous Mobile Robots (AMRs) are making their stand. The past few decades have brought monumental changes to the world of order fulfilment and material handling. The spike in labor cost and shrinking of qualified workers has pushed the industry to look for alternative solutions . With available technological improvement across robotics, researchers added a new variety of robot to the warehouse robotics. Though certain types of warehouse robots such as AGVs, AS/RS, and others have already been around for years, many warehouse managers are finding themselves wondering about a new entrant called Autonomous Mobile Robots (AMRs). What are Autonomous Mobile Robots (AMRs)? Autonomous Mobile Robots (AMRs) are a simple, efficient and cost-effective way to automate material handling and in-house transportation tasks in nearly any situation where employees would previously have been required to push carts around the facility. AMRs understand and move through the environment without being overseen directly by an operator or on a fixed predetermined path. These robots have an array of sophisticated sensors that enable them to accept and interpret their environment, which helps them to perform their tasks in the most efficient manner and effectively navigate around fixed obstructions and variable obstructions. While Automated Guided Vehicles (AGVs) carry out operations at rigid, preset routes, AMRs find the most efficient route to achieve each task and are designated to work collaboratively with operators such as picking and sortation operations. AMR is a relatively young technology that is in the first stage of growth and adoption. However, it has […]