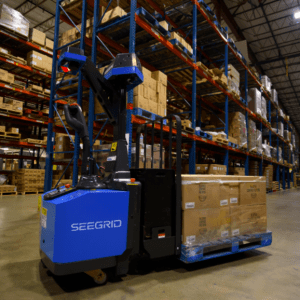 This device is unable to play the requested video. In autonomous robotics, the area of materials handling is often overshadowed by the pizzazz of self-driving cars. But a rapid shift toward automation in e-commerce distribution centers and manufacturing plants has led to a thriving subset of robotic logistics focused on supply chains and automated material movement. There are a bevy of players in the space ranging from small startups to Toyota. One medium-sized player is Pittsburgh-based Seegrid, founded by roboticist and Carnegie Mellon University alum Hans Moravec. The company makes a range of vision-guided vehicles for indoor materials handling, such as pallet jacks, forklifts, tuggers and other factory and warehouse vehicles. Seegrid says its robots have cumulatively traveled more than one million miles around factory and warehouse floors. Grocery chain Giant Eagle, which invested $25 million in Seegrid in 2016 and is the majority shareholder in the company, uses Seegrid robots in its Pittsburgh warehouse. General Motors, Whirlpool, Boeing and Zulily are also customers. Seegrid’s key differentiator in materials handling is its approach to navigation. Unlike traditional vision systems, which rely on lasers and other sensors to enable autonomous navigation, Seegrid’s system uses only cameras. The benefit to this approach, according to the company, is all about the data. ZDNet recently caught up with Seegrid’s VP of product Jeff Christensen to talk about automation and why robotics in materials handling is maturing at a rapid pace. The following is an edited excerpt of our conversation. Demand: There’s been a surge of demand for automation in materials handling over the last 5 years, Christensen said. The rise is due to a confluence of forces, including but not limited to a boom in e-commerce, mass customization of goods, advances in technology, and shifting economics in supply chains. “There are a lot […]