Founded in 1922, this year is Abel Womack’s 95th anniversary. By every measure, that’s a very long time. Having been here for something close enough to half that time, I’ve been asked to share some thoughts on the occasion. 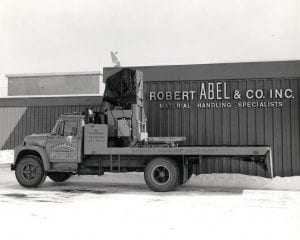 Although I don’t have any direct knowledge of the very early years, I did have the dubious honor of clearing out our old files when we were running out of room back in the 80s. From those hours in the “vault”, I learned that there was documentation for every order from the beginning of time. So, yes, I became fascinated with those from the 1920’s. Imagine that, starting a company during the Roaring Twenties- the year of Al Capone, speakeasies and the ensuing depression.

I learned from my rummaging that the company mostly sold hoists and cranes back then-machinery to lift heavy things. That’s a shrinking business and only a tiny part of what we now do. We don’t build heavy things much in the US anymore and, when we do with things like cars, we automate the lines, eliminating most of the lifting people used to need to do. I also learned that most of the companies from that bygone era are not with us anymore. In fact, the only name I recognized was GE. Everybody else is now gone- shows how hard it is to create a sustainable company. I also learned how little things cost back then and how simple documentation was. Typically, there was a memorandum of understanding, instead of all the contracts and boilerplate of this era.

That makes me think about how much the whole selling process has changed over time. I’m guessing that technical salespeople in the early years were revered as they were the only subject matter experts available. My old bosses when I joined the firm in 1974 were engineers, really smart and fairly arrogant. There was no internet so there was no method to easily educate yourself, leaving the ‘expert’ as the man. Customers told him what they needed, he developed a proposal and the customer bought it, or not. Easy peasy! 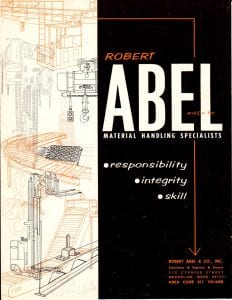 That led to the period of the 60s to the 80s; the burgeoning era of the Purchasing Department. Purchasing agents, as they were called, didn’t really know much about the subject at hand but developed RFQs (Request for Quotes), ostensibly to make sure that everybody was bidding “apples to apples”. God, I’ve come to hate that term. Apples may all be the same fruit, but each is, in fact, different to the discerning eye- something purchasing of that era didn’t possess.

Next came Procurement Departments and RFPs (Request for Proposals). Instead of price quotes, suppliers developed both qualitative and quantitative proposals, trying to add form to substance. Unfortunately, this became a time consuming, confusing process that often resulted in a race to the bottom for the suppliers and an inadequate end result for the customer. Many times, good companies tried to explain why certain incremental items (and costs) should be added to the solution, but Procurement people, through no fault of their own, were bonused for how much money they saved their companies- so bare bones, inadequate solutions too often won out.

We’re now starting to move away from transactional sales and moving to an era of supplier: customer collaboration. What a concept! Instead of sitting on opposite sides of the table trying to out negotiate each other, companies are realizing that complex systems require an interactive, collaborative process. Finally, suppliers are developing solutions that best solve the problems and, in this information era, offering to share costs and agreed to profit margins in order to develop the final cost. Having been through the alternatives, this is the best yet.

And that’s just the change in buying strategies over time. Now, just picture the change in technologies. When I started in the 70s, lift trucks handling a half dozen pallets of merchandise an hour in 15’ high rack was stellar. Now, the sophistication of lift trucks, robots, sortation and automated storage and retrieval systems is dizzying. Promat is this week and, once again, it will be like an amusement park of material handling equipment.

The new wave is unmanned automation. It’s getting difficult and expensive for companies to attract, hire, train and retain unskilled labor- and it’s only getting worse. So, many unskilled manual jobs are being transitioned to semi or totally automated solutions. The result is greater efficiency, lower long term costs and fewer HR issues. Sadly, some people are getting lost in the shuffle.

That said, most people would rather learn a skill than hump boxes in a warehouse, so the savings could be used to retrain people for a more rewarding career and one that isn’t easily interrupted by the next great advancement in automation. That is, until AI (Artificial Intelligence) becomes prevalent.

The good news is that it won’t happen until we are at least 100!

I recently attended a virtual networking event for the Bio Tech industry. When asked by the group … END_OF_DOCUMENT_TOKEN_TO_BE_REPLACED