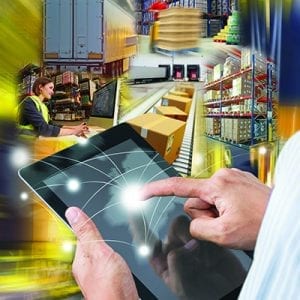 Warehouse in the News 2017 Warehouse/DC Equipment Survey: Investment up as service pressures rise LM Exclusive: Major Modes Join E-commerce Mix Complexity of e-tailing is having impact on “middle markets” says JLL Top 5 Trends in Enterprise Labeling CBRE report highlights ongoing strong conditions for industrial real estate market More Warehouse News Two broad findings stand out from the results of our “Annual Warehouse and Distribution Center (DC) Equipment Survey.” First, spending generally is up, quite noticeably in categories including information system (IS) solutions; and second, pressures associated with e-commerce fulfillment are being felt—with respondents expecting those pressures to rise. Peerless Research Group’s (PRG) annual survey, conducted in early January of this year, found that 35% of respondents were proceeding with investments given the state of the economy, up from a 21% response to the same question in early 2016. The percentage of respondents who said they were “holding off” on investments also fell—from 21% in 2016, to 16% this year. The more robust outlook also can be seen in the 54% of respondents who expect to be spending more on materials handling systems and related technology over the next two years—an increase from 41% last year. Why the bump this year? It’s likely tied to the unrelenting growth in e-commerce and the fulfillment pressures that exert on operations. For example, just as the survey was being closed out in January, Amazon announced its plan to add 100,000 fulfillment jobs over the next 18 months. Around the same time, the U.S. Commerce Dept . released data on December 2016 retail sales that showed purchases at department stores fell by more than 7% compared to the previous December. That same report also noted that sales by non-store retailers, which include Internet and catalog purchases, grew by 10.4%. With e-commerce marching […]